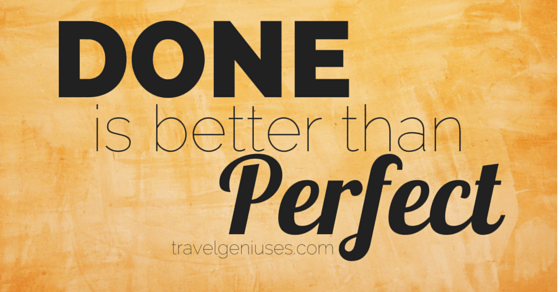 When I first became an agent I had been a stay at home mom who grew up in a teeny tiny town in the middle of nowhere. I had barely been out of the state I lived in, let alone the country. I didn’t have money for fancy clothes and had never had a meal that required more than one fork.

I was super insecure and thought – Who’s ever going to want to book a trip to Africa with someone like me? Then I would go to travel agent events and see people who dressed WAY worse than I did and whose manners were ATROCIOUS (there’s one at every event) and I would find out that they were super successful selling safaris and luxury cruises.

I remember one time reading about an agent who was really successful marketing with videos on youtube. I checked them out, and they were HORRIBLE! He was awkward, it was super cheesy with him standing in front of a green screen  I never would have put my name on something like that. But you know what? He put them out there, even though they weren’t perfect, and it worked!

Just tonight I was reading an article about an agent who manages to sell several millions each year, mostly in upscale hotels, online. Like, they get an email and the person books every time. So of course I checked out their website. It’s ugly. The design is old, the pictures are terrible, the hotel reviews don’t even include much information. But you know what? They’re super successful! It’s not perfect, but it’s working.

So I just want to remind you (and myself). To stop trying to make everything perfect. Yes, it’s important to do things well, perfectly, even. But first, just get it done. Get your website up, get your newsletter written, put up a few posts on facebook. Just get it up there, then you can work on making it better.

Do it! then come back here and show me what you’ve done.